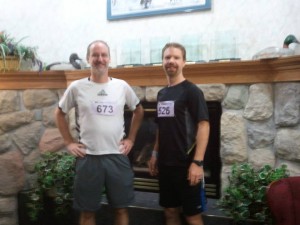 He picked me up from Chicago’s O’Hare Airport and drove us to Marquette, Michigan, a little town on the coast of the upper peninsula. This town of some 20,000 residents boasted a college and a quaint downtown area. But we weren’t students or tourists. We were on a mission – two high school buddies ready to tackle 26.2 Marquette miles. It was Bobby’s first marathon and I was there to pace him.

When you pace a friend you have one job. Your buddy might say something like, “I’m going to start the race a little faster so if I get tired near the end then I will be able to slow down and still make my time.” Your job as a pacer is to give him a solid dope slap, bring him back to reality, and insist on a steady pace.***

It’s a rookie mistake to go out too fast and a lot of runners end up with a DNF (Did Not Finish) because they bite off more than they could chew in the first half. Every runner has done it. Every runner regrets it.

The thing is, you feel great on mile one and mile five and even mile ten. But at mile 17, 20, and 23 that early effort catches up with you. If you don’t start the race in a way that plans for the end, then you won’t finish – or you will end up crawling across the finish line an hour after you planned.

Pace is important for football teams, too. You run the ball in the first quarter so by the time the fourth quarter comes the other team’s defense is taxed. Boxers throw body shots in the first rounds knowing they will pay off in the later rounds. 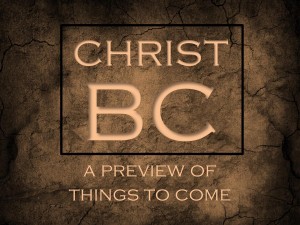 Outside the world of sports, I’ve seen this on death beds. People who spend years nurturing friendships and family relationships spend their last days surrounded by love, peace, and support. People who neglect those important relationships experience loneliness, awkwardness, or conflict. Despite how some sappy movie might portray end of life reconciliation, I’ve never seen that kind of magical ending in real life.You reap what you sow.

This week at LCC we are starting a message series that will lead us to Easter. The resurrection is the finish line, but it wasn’t a quick sprint. From the beginning of time God planned and prepared in order to bring about the redemption story that includes the empty tomb. This week we start at the start, how Jesus was at work from the genesis of time. He was unseen and unappreciated. For millennia shadows of Jesus portended his sacrifice and resurrection. God started in a way that planned for the end. God must be a pacer.

***My buddy, Bobby Jackson, kept a mechanical pace until mile 12 when his knee, not his pace, slowed him down. He finished the race in a respectable time. Bobby may or may not have cursed during the last half mile. You’ll have to ask him.