Tested by a bison 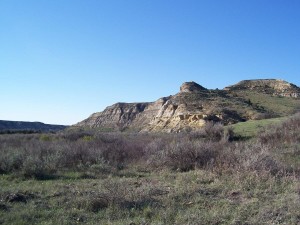 It’s a state with barely two outstanding features. First, North Dakota is the third-largest nuclear superpower in the world (behind the rest of the U.S. and Russia). We store our nukes in hundreds of underground silos peppered throughout the bluish-purple flax fields. Second, North Dakota is the Peace Garden State. It happens to contain the latitudinal half-way point of the border between the U.S. and Canada. This is the longest unguarded border in the world. I would be willing to entertain the possibility of a relationship between these two features.

On the western end of the state some positive things happen – you are almost out of the state and you run into Theodore Roosevelt National Park. The latter conjures images of roughriders ranching cattle through painted canyons that portend a more textured and scenic western neighbor, Montana. About ten years ago Ben, my brother, took me to the park (another three hours in the car).

We spent all day hiking a small portion of the park’s seventy thousand acres, pretending we were younger and in better shape than we really were. We didn’t see any bison, but all day we dodged bison “evidence” along the trail. I had never seen a bison except for the one stuffed in the natural history museum my elementary school teachers took us to every year. I decided I wanted to see one with a heartbeat. I wanted to stare into the eyes of a two-thousand-pound bull. I wanted to experience the rugged northwest. So I hiked and searched. Nothing. I told Ben to be on the lookout for a bison sighting. Nothing.


In the late afternoon, when our legs were tired and our bellies grumbling for something more than jerky and trail mix I made one last effort. “I’m getting off the trail,” I informed him. “I’m climbing one of these hills and getting a better view.” If a bison was to be seen, then this vantage point would reveal it. My older brother is more likely to stick to the rules and the trails but he reluctantly joined the ascent. 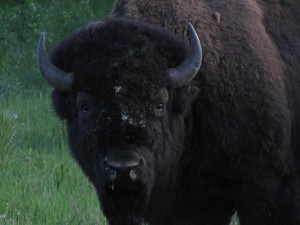 Apparently my brother is also a bit more observant than me. About halfway up the hill I heard his voice behind me: “Whoa-ho-hoa, I’m out of here.” I looked back for some clue as to what startled him. All I saw was his back, twenty yards away and descending quickly. Then I looked up and saw it. It was about 10 yards from me (now sixty yards from Ben): a bison. It was not taxidermied. There was no barrier between him and me. I had expected to see him from a distance. I was uncomfortable with the lack of distance.

You know how thoughts can race through your mind at times of stress? I don’t mind saying I was scared and this was the thought that flashed through my mind: Am I supposed to run, or am I supposed to stand here? And then a second thought flashed: Ben is already running, so if it goes after him, then I guess I’m just supposed to stand here. I’m not among the candidates for brother-of-the-year.

I wish this story had a more dramatic ending. I wish I could tell you the bison and I stood there considering one another, connecting on a fierce level, silently communicating secrets of a primitive existence. That’s not what happened. I stood there scared to death. The underwhelmed bison lumbered away. That is all.

I did, however, learn something about myself. I didn’t really want to see a bison. What I wanted was the story of seeing a bison. I wanted to tell people I had seen a bison. I wanted to have seen a bison without a terrifying fenceless, cage-less experience. Perhaps God chuckled to himself when he set me and one of his dumb creatures on intersecting paths. Maybe the bison had the same evaluation of me. If this was a test, then I failed it.

This Sunday at Levittown Christian Church I am speaking about a man who climbed a mountain and passed a test. His name was Abraham. His test was extreme. And I am not like him.

I want to think I am like him. I like to think I would give up anything for God, that I have rugged faith and I excel at obedience. Sometimes I even fancy myself martyr material. But really I would rather have a story about suffering than actually suffer. I would rather tell people I sacrificed than actually make the sacrifice. I want my faith to be a blog post while God wants my faith to be alive. So every once in a while God tests me with the spiritual equivalent of a bison. Sometimes I pass. More often I fail.